WHAT I DID ON MY VACATION

I haven’t blogged in awhile—I have been feeling poorly from Meniere’s, Neuropathy, Arthritic hip and the bottom three vertebrae in my back rubbing together (oh woe is me!), so I haven’t felt strongly enough about anything to take the time to put word to computer. Though, I have felt very strongly about laying down as much as possible. Oddly, when my back was giving me grief, it was very difficult to rest, because my lower back would feel like I was being stabbed there when I tried to move or get up (oh woe is me again!) after laying down for just a few minutes. At night I would flip from side to side to get comfortable enough to sleep, knowing that I would be in big trouble in the morning. It was taking me twice as long to get ready for work every morning because I had to find handholds to pull myself out of bed, because of the excruciating back pain, and slowly make my way to the shower. The slightest miss-step would result in a stifled cry of pain (oh woe, woe, woe is me!). I finally decided I’d hade enough and that it would not right itself after like a pinched nerve will generally do, so I emailed my doctor, and sometimes saxophonist, David Poor to see if he would like to have me come in and x-ray my back to see if there was something going on out of the ordinary. He suggested that I see a chiropractor and referred me to Dr. Theron Hall who’s office is near our home. Hall did the x-ray—thus the identification of the hip and back trouble. He started me on electro therapy, spine decompression, adjustments and stretching exercises. In a couple of weeks I was pain-free. With some occasional maintenance, I hope to be able to manage it.

By the end of the chiropractic sessions I was ready for our big family adventure of the summer. My whole family, minus my son-in-law, Jeff—he needed to stay in Aurora, CO to work and watch over his and my daughter Ingrid’s pair of Vizsla dogs, the female about to give birth to 7 or 8 pups--were going to spend the better part of the week together to celebrate a couple of big events (besides the dog birthing): My oldest son’s (Jesse) wedding to our new daughter-in-law, Amanda, and my youngest son, Dylan, leaving on a two-year mission for our church, The Church of Jesus Christ of Latter-day Saints in the Cleveland Ohio Mission. I took the entire week off from Thursday to the following Wednesday (8/18/11 to 8/24/11) to spend a week with Dylan and the others. Jesse and Amanda planned their reception here in Utah—they live in Topeka—to coincide with Dylan’s farewell, so that we could all be together for the last time before Dylan left, because he would get gone for two years.

It was a great time. Ingrid got to town a day before Jesse and Amanda with her little son, 4 ½ month-old, Kalvin—Thursday I think. Jesse, Amanda and our daughter, Heidi—Heidi took the time off from the police force as well—had never seen Kalvin, so it was a big “everybody get to know Kalvin week” as well. Jesse and Amanda got in Friday Night and we all went to dinner at a Japanese Steak place—kind of a tradition with us. 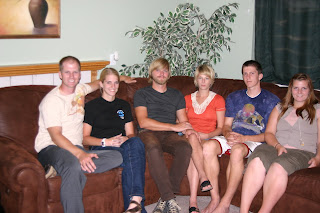 We had a reception at our home for the newlyweds the next evening. 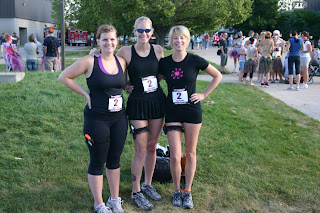 However, the girls, Heidi, Ingrid and Amanda, took part in a 4-mile mud run up in Ogden early in the morning. 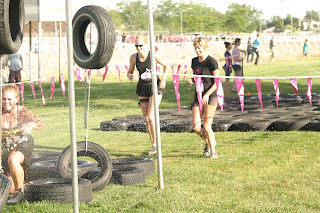 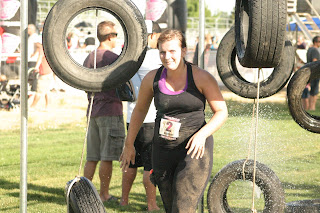 Karen and I watched Kalvin while Jesse and Tyler ran to different points of the girl’s route to get pictures. It was pretty entertaining. Hundreds of young women dressed in odd, to bizarre, outfits ran through mud and an obstacle course and ended running though a big containment of soap suds at the finish line. Each little team had their name. Our girls were the “Guns and Garters” and they wore garters, with a little holster and plastic gun, around one of their upper legs. Almost all of the teams had names alluding to the dirty circumstances—the event was called the “KISS ME DIRTY RUN”. One of the most memorable team names, to me, was the “Filthy Whores”.

The reception was really nice. Jesse and Amanda brought almost everything for it with them from Kansas. We had planed on having it in the back yard. We borrowed some tables and chairs from friends at church and goy everything ready. Of course a very strong cloud burst washed those plans away and we had everything in our house. It worked out well enough—a little crowded, but dry. We had a good turn out of family and friends who live in Utah. It is very good to have Amanda as part of our family. She is a perfect partner for Jesse and they obviously love each other very much. I feel like I now have four sons and three daughters and they are all good kids.

On Sunday, we went to Dylan’s Farewell Sacrament meeting. He talked on Faith and Repentance and did a great job—it had me fighting to hold back tears at a couple points. My wife, Karen, also spoke on Baptism and the Gift of the Holy Ghost, and our stake president, who was in attendance with his two counselors, took a few moments to commend Dylan on his talk and his preparation for his mission and add his own testimony. Dylan had some of his friends come by later and had a last—for two years—go at some videos games.

On Monday, we went on a hike—I think around 5 miles or so in total—on the backside of Mt. Timpanogos to see some waterfalls. 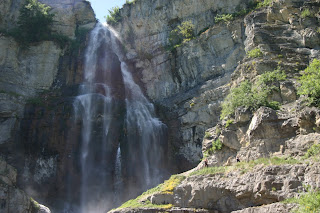 It was pretty rough terrain on some of the trail and plenty of ups and downs. 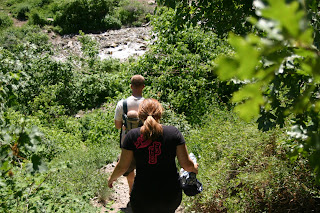 Tyler carried Kalvin in a papoose-type backpack the whole way, and Karen and I trailed along pretty far back—obviously guarding against Indians sneaking up on our group from behind. 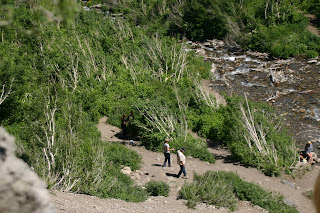 We stayed near the falls long enough for me to cool my feet off in the water and then we headed back up the trail to get back in time to go pick up Karen’s sister, Connie, from work. My butt was dragging the ground when we got back to the parking area. It took me a couple days to recover. Karen had sore calves so bad she could hardly walk the rest of the week.

Tuesday Jesse and Amanda went site-seeing over to the Great Salt Lake, getting in and floating, and drove over to the Bonneville Salt Flats. That evening Karen and I went to see Heidi and her softball team win their league championship. It was a blow-out. Heidi’s team was so far ahead they called it. 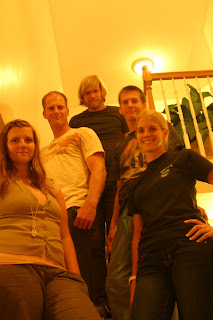 On Wednesday we took our son, Dylan, to the Missionary Training Center. On the way we stopped at a sandwich shop, the Italian place and had lunch together—Karen and I used to eat at one of their various shops quite often when we were first dating and early in our marriage when we lived in Utah—and then said goodbye to Jesse, Amanda, Ingrid and little Kalvin. Then it was off to the MTC to drop Dylan off where he would spend three weeks of training before he flies off to serve in Cleveland. It was the culmination of a week of family fun with all of our kids in town. 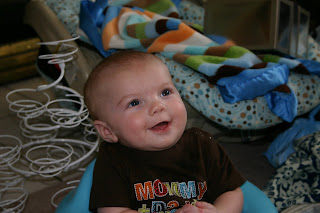 Kalvin was probably the hit of the week. He is great little baby--easy to make smile and laugh, seldom cries, very good-natured—I think, without reservation, the most good natured baby I have ever been around—and of course, very handsome. We will miss Dylan greatly during the next couple of years, but are happy to share him with our Father-in-Heaven while he labors to share the Gospel with our spiritual brothers and sisters in that part of the world. Dylan is a great young man with strong, but humble faith in Christ and His Atonement. 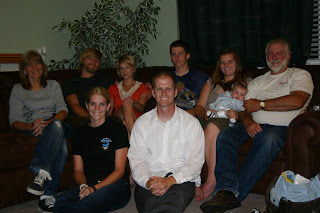 It was great to have us all together again but the time was way too short.

So, I had fun on my vacation. I felt pretty good, except at the end of the mountain hike, and spent a week with the people whom I love most and I didn’t have to drive very far to do it. Thanks kids for being the great kids you are and loving each other as much as you do.

Posted by Randy at 7:00 PM No comments: Links to this post