Here is my next instalment of Profiles of Leadership in America. Not all efforts by great leaders are counted as immediate successes or even as successful as intended. Nevertheless, intentions often count for much and, in the case of James Oglethorpe, his dream of a Georgia, successful and offering freedom for all, eventually became reality, although almost a century after his death. 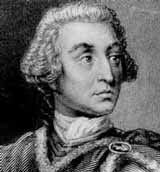 Last, but not least, of the original thirteen American colonies, was Georgia (named for England’s King George II). When one thinks of Georgia today, they may think of the pro-slavery state deep in the antebellum south. Though it did eventually become a great stronghold of slavery, its founder, James Oglethorpe did not intend it to be.

James Ogglethorpe was born in 1696 in Surrey, England, to Sir Theophilus Oglethorpe and Lady Eleanor (Oglethorpe). He began his schooling at Oxford, but immediately entered the Austrian army of Prince Eugene of Savoy as the Prince's aide-de-camp. Oglethorpe served with distinction in the Austro-Turkish War of 1716–18. In 1722, he was elected to the British Parliament and became interested in humanitarian causes. He published an anonymous pamphlet, 'The Sailors Advocate,' in which he exposed the deplorable conditions experienced by sailors in the Britain's Royal navy. He was also became acquainted with and concerned about the abuses of the debtor’s prison in London. He was appointed to a committee to investigate the abuses, and it was at this time that he conceived of his plan to send English debtors to North America to establish yet one more colony. He planned also to establish an asylum for oppressed Protestants throughout Europe.

The fact that England wanted a defensive buffer between Spain’s colony in Florida and her own colonies to the north probably encouraged the King of England to grant a charter to Oglethorpe in1732. In 1733 with 120 original colonists he established Charleston and Savannah, and served for 10 years as Governor. His military experience served him well as he defended his colony and its neighbors against the Spaniards and Indians from Florida. His military successes and his efforts to trade with the Cherokees enabled Oglethorpe to render to the Crown services much beyond the usual of a colonial administrator. In 1739, during the War of Austrian Succession a related lesser conflict known as the War of Jenkin’s Ear erupted between Georgia and Spanish Florida. With Seminole Indian allies, Oglethorpe managed a number of successful raids on Spanish forts, with the exception of a failed siege of St. Augustine.

Because the colony's primary role, in the British Governments’ eyes, was as a military buffer between English and Spanish-held territories and because of Oglethorpe’s personal views against slavery, the original plan for the colonisation of Georgia did not include, or allow the use of slave labour. In contrast to the other American colonies, Oglethorpe, as Governor of Georgia, insisted that slavery be forbidden in his colony. He not only hated slavery because it degraded blacks, but also because he believed that it promoted laziness in whites. He believed that slavery was contrary to the principles that his group was trying to embrace—of lifting the oppressed. He feared also the threat of bloody revolt, as was experienced in South Carolina’s Stono Rebellion of 1739.

James Oglethorpe’s attempt was, in some respects, a failure. The conditions for release from debtor’s prison, that Parliament set, were so difficult to meet for most debtors that very few actually arrived at Georgia’s shores. Almost half of those immigrating to Georgia were Germans, Swiss, and Scots including a few Jews. In some respects the anti slavery position kept the colony from competing economically. Land holdings no larger than 500 acres and no slave labor made it difficult to raise profitable cash crops like rice or tobacco. Many settlers began to oppose Oglethorpe and regarded him as a dictator, causing newer settlers to move on to the north, to South Carolina, where they felt less restrictions and a better likelihood of economic success. In 1750, after a series of political defeats, Oglethorpe essentially gave up his opposition to slavery and the ban was lifted. It was not long after Oglethorpe returned to England that Georgia followed the lead of her sister colonies and embraced slavery.

Although he was able to preserve his colony for England militarily, he returned to England, financially strapped because of the many non-repaid loans he made to his colonists, and disappointed that slavery would surely take hold in his colony. After his return to England, in 1745, Oglethorpe was promoted to the rank of Major General. During the Jacobite War of that year his conduct resulted in a court marshal and acquittal. He was later raised in rank to full General and died in England.

Eventually, slavery and fewer restrictions on land ownership transformed Georgia into a booming colony. Though it became an economic success in his absence, Oglethorpe’s Georgia was an experiment in noble humanity that failed. If James Oglethorpe had been as good a financial leader as he was a moral leader, perhaps he could have changed the philosophic tide in the southern colonies. If the need for profit could have been met without resorting to immorality of slavery, the term “antebellum south” might not have meaning today.