I had mentioned in my personal information spot and my introductory blog that I was a sculptor. Actually, I have not done too much work over my career, but I have recently recovered much of the interest that I had when I was a kid molding dinosaurs from modeling clay and play dough. I thought now might be a time for a change of pace and show a bit of my recent work.

In all humility, I was considered a great potential talent in Jr. High and High School by my teachers. One of my teachers kept some of my sculptures for her private collection, telling me that she hoped to retire on them some day. But, I was also excited about music—songwriting in particular. I played in rock bands in and out of High School and after my mission in Guatemala and El Salvador from 71' to 73' I devoted my creative efforts to a music career, which though somewhat successful never panned out as I would have wished.

When I moved back to Kansas, my home state, to care for my mother, I decided that I had given the music career a good shot and needed to go back to school and get a degree before I turned 50. I did get a Bachelor's in History—before my 50th birthday—and a Master of Science degree in Occupational safety and Health—within two years after. During the process of getting the degrees I worked full time as a safety manager and donated a lot of time to my church responsibility as member a student branch presidency—a very busy schedule. When I had finished, I felt like I had lots of time on my hands, so at my wife's suggestion, I tried my hand at sculpting again. She wanted me to do portraits of all of our family, which I did in ceramic clay that I fired in a kiln and painted. We used the busts in a picture for a theme-based Christmas card that year. 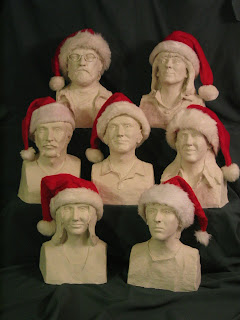 So, for the past few years I have done a number of pieces that I feel pretty good about. A friend who had been living in Topeka and had seen some of my recent work moved to southern Utah and called me with a commission to create a bust portrait of his business partner who had passed away. The result was a bronze bust to be placed on a pedestal in a local St; George Park named in his partner's honor. 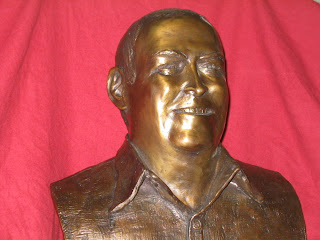 This got me to thinking I could do some other portraits of famous characters from history and find a home for them. It occurred to me that a piece on Jesus would be of serious interest of Christian churches of any denomination. I got a write-up in the Topeka Capital-Journal about the “smiling Christ”, but so far, I have not gotten a lot of interest to mass produce the piece in bronze. 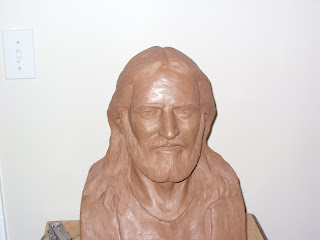 I followed that with an Idea of doing Abe Lincoln and Ichabod Washburn. Abe, of course, is probably the most sculpted character in history, but my intension was to sell Abe along with Ichabod, due to their combined historical import to Washburn University, of Topeka, Kansas. You see, Topeka started a city college in 1865 and named it Lincoln College in honor of the President who had just been assassinated. By 1868, the school was in danger of bankruptcy. Ichabod Washburn, the Massachusetts industrialist noted for inventing barbed wire and supporting and donating to good causes, donated $25,000 to save the school--he died shortly after making the donation and never had the opportunity to visit the school. In honor of his donation, the school changed its name to Washburn College, later to become Washburn University. My idea was to sell them the idea of placing a bust of both Lincoln and Washburn on campus. The idea was good to a degree--sadly, they commissioned a bronze bust of Washburn only. 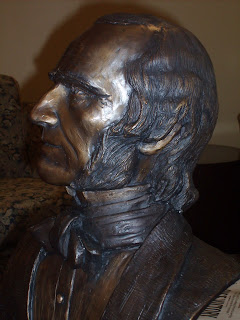 I followed up the Lincoln with a George Washington—it seemed like the obvious move—who I think he epitomizes the American ideal. A Matching Washington and Lincoln set. 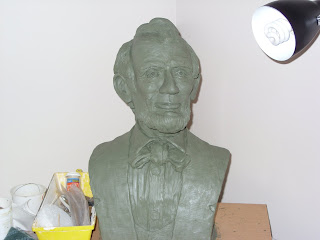 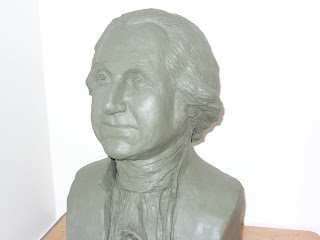 Then, during a recent conversation with a musician friend who saw my work, my friend suggested that Rock Icons were a good plan for marketing mass production. He suggested a bust of Rock Legend, John Lennon as a starting point for a reproduction marketing scheme. I thought he was probably on to something, so I began a bust of Lennon, who is a favorite of mine due to his song writing skills. 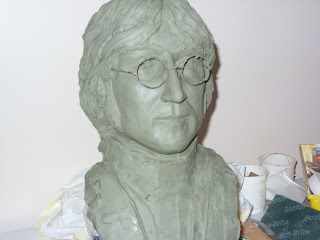 I am not sure where the sculpting business will go for me but it has been a lot of fun. Tell me what you think.
Posted by Randy at 8:10 AM

This is my first visit to your blog -- don't worry, it won't be the last -- and it's also the first time I have ever heard anything about your interest in sculpture. I'd say you're pretty good at it, and that you should take it up in earnest. Neither of us is getting any younger, after all; as you know, I only recently took up ballroom dancing, which is proving to be one of the joys of my life during an especially difficult time. And I think Grandma Moses was around 70 when she took up painting. So by all means, go for it!

BTW, I just added a permanent link to this site to my own blog (I miei cari amici.) I also have another blog called Convivio, in which I share Flickr images I really like, that were taken by other people. In some ways, I think Convivio is the better blog, although it gets far fewer visitors.