In our great national anthem, The Star Spangled Banner, we sing of America as the land of the free and the home of the brave. Many who were born into slavery in the early years of our nation’s history were denied freedom but they lived bravely none the less. Some put their bravery to the test to obtain personal freedom and still others turned yet another page and bravely worked to free their fellows. One of the most impressive of these was a black woman. 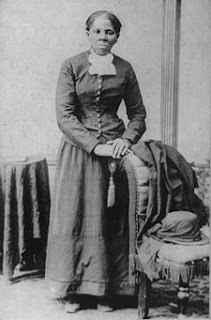 Harriet Tubman was born around 1820 into a slave household in Maryland and was given the birth name of Araminta Ross. Her parents, Ben Ross and Harriet Green, were married slaves who had eight other children and served the same master household. In her childhood years Harriet braved the same experiences that most slaves suffered in the Antebellum South. She saw siblings sold to other slave holders and was herself rented out as a servant to others to work away from her family. She was often mistreated, made to do dangerous and unhealthy tasks. When she was deemed difficult to manage by her task masters she was punished, many times by brutal whipping. On occasions she was returned home deathly ill after being rented out to harsh treatment and would be nursed back to health, only to be rented out again. As an adolescent, she was struck on the head accidentally by a two-pound weight thrown by an angry overseer at another slave. The incident left her bleeding and unconscious and she was carried back to her home where she was not allowed to recover, but sent into the fields to work. In later years she would suffer seizures that would continue throughout her life.

Harriet’s father was released from slavery by 1840 due to a stipulation that he be freed at age 45 in the will of a former owner. It was learned a few years later that Harriet’s mother had also been given a similar gift of freedom in her previous owner’s will to be honored when her mother turned 45 years of age and that any children born to her after that age would be free born. However, her owners at the time were unwilling to honor the prior owner’s will. By 1844, Harriet had married a free black man named John Tubman and changed her name to Harriet. When it was determined in 1849 that she was going to be sold, Harriet prayed that her mater’s heart would be softened. When it was clear that his heart would not soften, she prayed that God would let him die. He died a week later, but it was clear that the sale was still going to happen. Harriet decided to escape to freedom in the North. Later that year, she escaped with two of her brothers to Philadephia, but her brothers missed their families and returned and Harriet returned with them. But, Harriet was determined to live free and she escaped again to Philadelphia without her brothers.

Harriet was not able accept just her own freedom, so she immediately returned to help her family to freedom using the famous Underground Railroad. The process was accomplished a group at a time at night and systematically and secretly moving from one safe house to the next until they reached the safety of the northern states where Tubman helped them find work. Eventually the escaping slaves had to go all the way to Canada because of the federally passed Fugitive Slave Law of 1950 that allowed runaway slaves to be returned to their masters. Though she was sought by southern authorities—she was known clandestinely as “Moses” within her organization , but never identified as the runaway, Minty Ross--Tubman was very successful in guiding her people to freedom, never losing one traveler on her underground railroad but bringing over a hundred to safety and freedom. During the years prior to the Civil War, Tubman became associated with other high profile abolitionists like Fredrick Douglas and John Brown. She initially helped Brown in planning some of his operations and helped enlist former slaves to join him in his raids. However she, like Douglas, did not believe that violent acts were helpful and was not with John Brown when he came to his end at Harper’s Ferry.

During the Civil War, Tubman initially worked as a cook and a nurse for the Union Army, exposing herself to small pox treating sickly soldiers. later she worked closely with the Army in the field, placing her self in further jeopardy as a scout and spy and led a raid that freed over seven hundred slaves. After the war she cared for her family and brought her elderly parents back from Canada to be with her. In later years Harriet became involved in the women’s suffrage movement with which she worked until her health failed her. When her health became bad, Harriet was admitted into a home for eldery blacks that she had helped establish in earlier years, and where she eventually died in 1913.

Harriet Tubman was a person that hungered for freedom and craved a meaningful and peaceful life. As a devout Christian, she felt guided by God’s voice—some believed that the injury to her head in her youth contributed to her believing that she heard the voice of God—and she worked tirelessly to help others like herself enjoy the same freedom and pursuit of happiness that all Americans were promised in our nation’s founding documents. Her leadership brought hundreds to freedom and her bravery and selfless example inspired many black and white Americans to believe that America was indeed the land of the free and the home of the brave.
Posted by Randy at 6:43 AM