I haven't added to my Prophiles of American Leadership segments for a while, so I thought it would be a nice change of pace for me to indulge myself and return to a historical vignette of an American to whom I give credit for leading in the world of literature. So, here are my thoughts on...

Though I watched a lot of television as a young boy, where I caught old movies as well as old and current programs produced for television, I also read a lot. I tended to read adventure stories—Edgar Rice Burroughs was my favorite—but, I also read many of the classics of literature before I got into high school. Before being required to read The Adventures of Huckleberry Finn in high school, I had already read it twice, along with its companion, The Adventures of Tom Sawyer. I have reread them both several times since, to my children, to expose them to great literature and story-telling, and for my own enjoyment. In my opinion, which I share with many others, The Adventures of Huckleberry Finn is likely the Great American Novel and no one has been his equal in producing colloquial speech on the printed page. Of course there have been other great American novels since—To Kill A Mockingbird and Gone With The Wind—and some extremely important and popular ones before—Uncle Tom’s Cabin and The Last Of The Mohicans—but, Mark Twain’s story about the coming of age of a disadvantaged, troubled youth, struggling with his conscience in a time when America was doing the same, was a masterpiece of writing that put America on the literary map of the English-speaking world. All of the serious novelists of the 19th century in the English language had been from Great Britain, like Sir Walter Scott, Jane Austen, and Charles Dickens. But Samuel Clemens, under the name, Mark Twain, became the Father of American Literature, and showed the American authors who followed after him how to do it well. 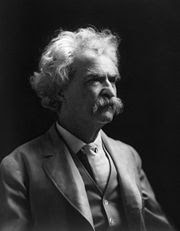 Samuel Langhorne Clemens was born in Florida Missouri twenty-five years before the start of the American Civil War to John Marshall and Jane Lampton Clemens. Clemens spent much of his boyhood in his Hannibal, Missouri, home along the Mississippi River. Samuel’s father died when Samuel was 11 years of age, which allowed for his mother, who was a free thinker and defender of the down-trodden and lover of animals, to have great influence on his personality and character. After his father’s death, Samuel took work as a typesetter and a contributing writer of humorous sketches for his older brother, Orion’s, newspaper. At the age of 18, Clemens traveled east and worked as a printer in Saint Louis, Cincinnati, Philadelphia and New York, and educated himself at the local libraries. By age 22, Clemens decided that he would return to The Mississippi River and pursue his childhood fancy, to be a river boat pilot. Clemens plied that trade from 1857 to 1861, from which he chose his pseudonym, Mark Twain, referring to the call of the leadsman on the river boat, measuring two fathoms depth in the river. At the start of the Civil War, Clemens and some friends joined a volunteer group for the Confederacy, but the group disbanded after a couple of weeks and decided to travel with his brother to Nevada where his brother was filling an appointment as secretary to the territorial governor. While in Nevada, he tried silver mining with little success, but in 1862, he began a career as a newspaper journalist and veered off shortly thereafter to humorous literary pieces, including the short story, The Celebrated Jumping Frog of Calaveras County. This piece was picked up and republished by other newspapers across the country, and much to Samuel’s surprise, brought him national notoriety and helped launch his career as America’s premiere novelist and humorist.

Clemens was highly critical of hypocrisy wherever he saw it. In The Gilded Age, he skewers American politicians and what he saw as a corrupted system of government in his day, which allowed “knaves” to govern at the cost of “fools”, and embraced a misguided, unthinking patriotism. Clemens seems to have shared religious notions with Thomas Jefferson, a believer in God, but suspicious of organized religion at large. In some lesser known writings, such as A Penn Warmed up in Hell and Letters from the Earth, he pokes fun at organized religion and “Christians” in particular, for a penchant to live their religion once per week or less, and a general sense of unchristian superiority and an inability to be charitable and tolerant.

Clemens was friends with and admired by many noted Americans of his time, including Ulysses S. Grant. But, he also enjoyed celebrity in Europe as well. His friends and admirers abroad included fellow greats of English literature, Rudyard Kipling, H. G. Wells, Lewis Carrol, and Alfred Tenny. His celebrity was due to his great talent as a writer and his ability to criticize, even ridicule, society and humanity, shedding light on their blemishes; and do so with disarming humor. He became, to some in his time, a voice of reason and conscience in troubled times. Much of his cynicism may have come from the many personal tragedies in his own life. His father passing at an early age and the accidental death of his younger brother, Henry, in a river boat explosion—Samuel had talked his younger brother into following him into the riverboat life—surely effected his general outlook. His later years also provided further unhappy moments: He had several financial setbacks due to business dealings with people whom he trusted too much and only had one of four of his children survive him in death. His wife, Olivia, died 1902 and his health, which had not been good for many years, declined through next eight years until his death.

Though Clemens may have suffered significant tragedy, hardship and disappointment during his life, he had a strong spirit of self achievement and social conscience. He overcame stumbling blocks placed before him by trying new things and taking chances on his abilities. His various careers prior to his final career gave him insight and experience to draw from to let his fertile imagination create characters and stories that will surely entertain and inspire readers, young and old, for centuries to come. His talent and persistence made him the first great American Novelist of international acclaim. He was the first great American humorist appreciated abroad—he was presented with a Doctor of Letters degree from Oxford University in 1907. And, he may have been the foremost popular moralist of his time. He led the way for many aspiring American writers who tried to emulate his great talent for telling a story and presenting a moral message, but few have approached the height of his achievement. In usual humor he stated the before his death:
I came in with Halley’s Comet in 1835. It is coming again next year, and I expect to go out with it. It might be the greatest disappointment of my life if I don’t go out with Halley’s Comet. The Almighty has said, no doubt: ‘Now here are these two unaccountable freaks; they came in together, they must go out together.’

Samuel Longhorne Clemens’ was prayer was apparently answered: He died April 10, 1910, one day after Halley’s Comet making its closest approach to the Earth.
Posted by Randy at 9:30 AM No comments: