Finally something I want to blog about again.

We had a couple of big events during this past month of April. Of course, I had my 59th birthday, but that is of no great consequence in the eternal scheme of things. The first real important event to me was the birth of our first grandchild, Kalvin Lee Harris. My daughter, Ingrid, went into labor while packing to move to their new home. Ingrid and my son-in-law, Jeff, had been trying to move to a more family-friendly house—they lived in a small apartment with a pair of big rowdy Vizsla dogs—and thought they would have plenty of time to get settled before the expected and blessed event. 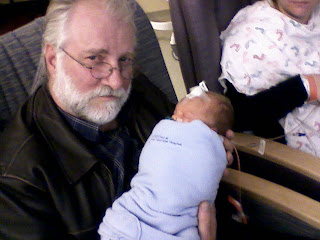 However, Kalvin came five weeks early. It was a bit scary. Kalvin ended up staying in the hospital for 9 days, though he weighed in at 6 lbs. 3 oz. at birth. Karen, Dylan and I drove out the following day (Saturday) and drove back five days later (Wednesday). Karen and I ended up holding little Kalvin twice each for about five minutes—not nearly enough to suit us—during our stay there. Poor Dylan was not given the opportunity to even hold him—his first nephew. He had to be satisfied to just see him through a window with an IV in the baby’s head and breathing tube going into his nose. Kalvin was wearing what looked like a wrestlers cap on his head to hold everything in place. 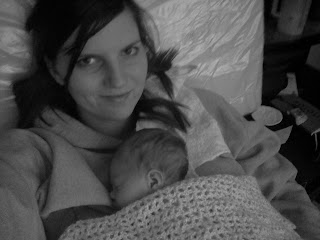 Of course the baby is at home now and the parents are able to enjoy almost constant contact with him. We of course know how they must have felt. Ingrid was also born a few weeks early and had to spend a week in the hospital, with us making visits back and forth. Of course, we had three other children at home to care for also, so we may have been a little bit more stressed, but it is hard to say when it is your first child it may be more stressful. I can’t help but have some regret that we live over 500 miles from the little guy and won’t be able to see him as often as we would like and be able to share in the daily, if not weekly, changes he and any siblings will go through as they mature.

The other big event was our youngest son, Dylan’s ordination to an Elder. I was able to perform the ordinance with Tyler, my second oldest son, at my side participating in the ordination circle. It was a very spiritual and joyful experience for me personally. I felt guided by the Spirit as I pronounced a blessing at the end of the conferring of the Melchizedek Priesthood and ordination to the office of Elder. Karen related to the group in attendance how before Dylan was born, though Karen did not want to have another pregnancy—she had had more miscarriages than full term births at that point—she felt prompted by the Holy Ghost that she was to have one more child and that it would be a boy. 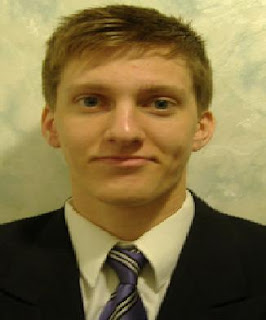 We have always believed that Dylan was here for a special purpose and I felt that strongly during the ordination and following blessing. Bishop Garrison also added a testimony of how special he thought Dylan was and of his leadership qualities, as well as his athletic prowess, by relating a story of Dylan’s participation in a young men’s activity which he personally witnessed. The circumstance was at the Army’s local Camp Williams obstacle course, where the young men as a team had the challenge of crossing a body of water after climbing upward through a lengthy tube just wide enough for one person to climb through which ended at a small platform 15 feet above a water obstacle. As I understand it, the water obstacle was about 25 feet across and some 10 feet deep. There were two round concrete posts of about two feet wide coming out of the water at about 10 feet apart with flat landings at the top. The top of the first column was a little lower than the platform at the top of the tube and the second column was again a little lower than the preceding column leaving a bout 5 feet left to cross to the opposite bank which was a little lower again. The problem was to get everyone (30 some people) across from one bank to the other with some aluminum walking platforms that could reach across the ten-foot spans and then get all of their gear and walkways with them. Apparently, Dylan’s solution to the problem included his being the last one across from the bank to the platform, but it necessitated him to leap across after the walkway was removed and then to push or pull the walkway along its way after walking acrossthe second span on the walkway. Without any more discussion and to everyone’s surprise, when the time came, he made the leap, landed solidly on the top of the first column and then helped push the walkway to the other side. The Young Men’s President, Brother Reese Roberts, who is a Major in the Army said he had never in his time at the post ever seen anyone do or even consider doing what Dylan had done to resolve the problem. That is our Dylan: Impulsive and totally self-assured in athletic abilities. He has injured himself many times in his short lifetime doing athletic stunts to prove his daring and self-confidence. I’m not sure if he knows that he has physical limitations. He is also dogged in his determination to accomplish a goal if it is something that peaks his interest. Within the last year he has taken to teach himself the piano and guitar. In a very short time he has developed a fluidity on the piano that astounds me and is way beyond where I was on the guitar is such a short time—all without learning to read a bit of music to any considerable degree. And last but not least I believe he has a strong testimony of the Gospel. Though somewhat reserved about expressing publicly his deep convictions, I’ve seen the emotion well up in him as he received his patriarchal blessing and his ordination to an Elder in the Melchizedek Priesthood. He decided this past year to serve a mission for our church and has “put in his papers in” and had the interviews required for a mission call. We are now awaiting notice in the mail to know where the Lord wants him to serve. When asked where he would like to go by the high councilman of our stake at the ordination last week, Dylan responded that he really didn’t care. I’m sure that he will make an impression and an impact wherever he goes. He always has.
Posted by Randy at 6:43 PM 1 comment: